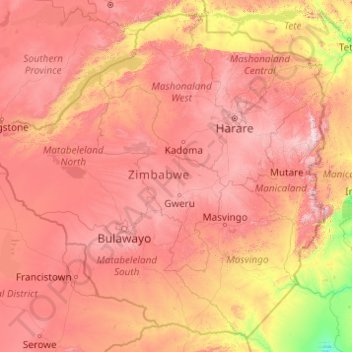 Zimbabwe is a landlocked country in southern Africa, lying between latitudes 15° and 23°S, and longitudes 25° and 34°E. It is bordered by South Africa to the south, Botswana to the west and southwest, Zambia to the northwest, and Mozambique to the east and northeast. Its northwest corner is roughly 150 meters from Namibia, nearly forming a four-nation quadripoint. Most of the country is elevated, consisting of a central plateau (high veld) stretching from the southwest northwards with altitudes between 1,000 and 1,600 m. The country's extreme east is mountainous, this area being known as the Eastern Highlands, with Mount Nyangani as the highest point at 2,592 m.[109]