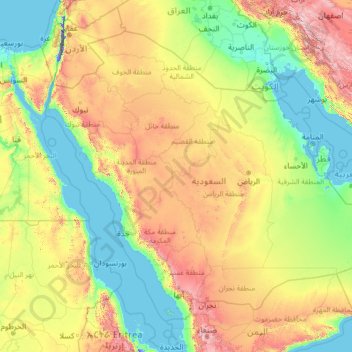 Saudi Arabia's geography is dominated by the Arabian Desert, associated semi-desert and shrubland (see satellite image) and several mountain ranges and highlands. It is, in fact, a number of linked deserts and includes the 647,500 km2 (250,001 sq mi) Rub' al Khali ("Empty Quarter") in the southeastern part of the country, the world's largest contiguous sand desert. Though there are a few lakes in the country, Saudi Arabia is the largest country in the world by area with no permanent rivers. Wadis, however, are very numerous. The fertile areas are to be found in the alluvial deposits in wadis, basins, and oases. The main topographical feature is the central plateau which rises abruptly from the Red Sea and gradually descends into the Nejd and toward the Persian Gulf. On the Red Sea coast, there is a narrow coastal plain, known as the Tihamah parallel to which runs an imposing escarpment. The southwest province of Asir is mountainous, and contains the 3,133 m (10,279 ft) Mount Sawda, which is the highest point in the country.