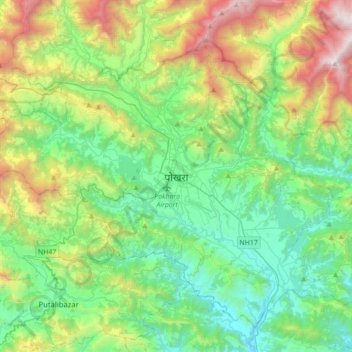 Pokhara (Nepali: पोखरा, Nepali pronunciation: [ˈpokʰʌɾa]) is a metropolitan city in Nepal, which serves as the capital of Gandaki Province.[3] It is the second most populous city of Nepal after Kathmandu, with 518,452 inhabitants living in 101,669 households in 2021.[4] It is the country's largest metropolitan city in terms of area. The city also serves as the headquarters of Kaski District.[5] Pokhara is located 200 kilometres (120 miles) west of the capital, Kathmandu. The city is on the shore of Phewa Lake, and sits at an elevation of approximately 822m.[6] The Annapurna Range, with three out of the ten highest peaks in the world—Dhaulagiri, Annapurna I and Manaslu—is within 15–35 mi (24–56 km) of the valley.[7][8]