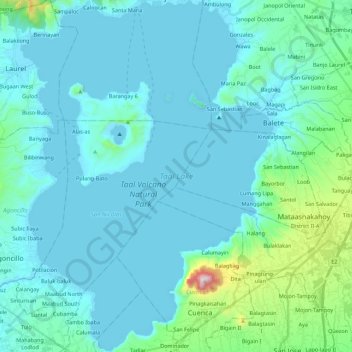 Taal Lake was once an inlet of nearby Balayan Bay, and was easily navigable from it. A series of major eruptions in the early 18th century battered the lakeside towns with earthquakes and volcanic debris.[7] The activity culminated in 1754 with Taal Volcano's largest eruption that blocked Pansipit River with tephra, blocking the lake's sole outlet to the sea. This caused the waters to rise, eventually submerging several lakeside towns – the remnants of which are reportedly visible underwater to this day.[8][9] Since the 1754 eruption, the surface elevation had risen from sea level to 5 metres (16 ft) above sea level, with the lake's once saline waters becoming freshwater after centuries of precipitation.