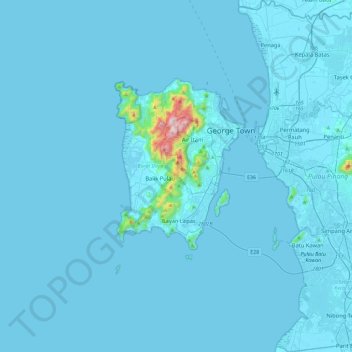 Penang Island is irregularly shaped, with a hilly and mostly forested interior; its coastal plains are narrow, the most extensive of which is at the northeastern cape. With a height of 833 m (2,733 ft), Penang Hill, at the centre of the island, is the tallest point within Penang. From a small settlement at the northeastern tip of Penang Island, George Town has expanded over the centuries, particularly in the northwestern, western and southern directions, eventually linking up with Bayan Lepas at the island's southeast and urbanising the entire eastern coast of the island. Meanwhile, the topography of Seberang Perai is mostly flat, save for a few hills such as Bukit Mertajam.